The arrival of Spanish Jewish expellees in Syria marked a turning point in the local economy. Establishing Sephardic kabbalistic yeshivot in Damascus, the immigrants also increased awareness of Kabbalah throughout the world. The Spanish expellee communities made such a diplomatic name for themselves in 19th century Syria, that the authorities exempted them from the Jizya (head tax). This was at a time when all other Jews throughout the Muslim world were obligated to pay this tax. Moreover, the Spanish Jews in Syria enjoyed capitulation (a granting of special rights for foreign subjects).

Spanish Jewish expellees in Syria also maintained close relations with European countries such as Spain, Italy, and France.  They shared a historical connection and the languages the Sephardi Jews passed down through the generations.

Portuguese Citizenship for descendants of Spanish and Portuguese expellees

Descendants of Syrian Jews are currently entitled to Portuguese citizenship, with all its various advantages:

The expulsion of Sephardi Jews 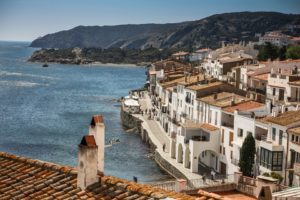 On March 31, 1492, King Fernando of Aragon and Queen Isabella of Castile signed the order that commanded all Spanish Jews to leave the country within three months or convert to Christianity. As fate would have it, the date of the final expulsion fell on the eve of Tisha b’Av (the day of mourning for the Temple in Jerusalem), 1492. In the wake of this expulsion, most of the exiled Spanish Jews came to the territories of the Ottoman Empire. Some of them chose to settle in Syria, in two main cities: Allepo (Aram-Tzova) and Damascus.

The expellee families who arrived in Syria at the end of the 15th century brought economic development to the Syrians in those two cities. The Musta’arabi Jews (Jews who had been living in Syria for many generations) called the new immigrants from Portugal and Spain Senores Francos, a name which indicates that the expellees enjoyed a high social status.

At first, the expellee communities in Syria were divided into three groups; Spanish, Portuguese, and Italian, with each group maintaining their own customs. Spanish Jewish expellees in Syria continued speaking the Castilian Spanish dialect for at least three generations after their arrival. The expellees’ relations with the local Musta’arabi Jews was complex. The Musta’arabis in Syria, unlike in other countries, refused to submit to the authority of the Sephardic leadership in matters of Jewish law and legal rulings.

The Sephardic Jews followed halachic rulings which came out of the city of Safed in the Land of Israel. Meanwhile, the Musta’arabi Jews saw themselves as possessing more ancient, original authority than the Sephardic immigrants. However, the Musta’arabi admired the Sephardic Torah learning, which demanded a deep investigation into the meaning of the text.

The Sephardic community insisted on praying from the prayer book that had been passed down from their ancestors, in various prayer quorums and synagogues. This created a rift between the Musta’arabi and Sephardic Jews, which widened with the appointment of Sephardic rabbis and their refusal to recognize the halachic authority of the local Musta’arabi rabbis. At the height of the conflict, the Sephardic community refused to bury their dead in the Musta’arabi cemeteries, choosing instead to create their own cemeteries.

Outstanding members of the Syrian communities

The expellee communities in Damascus and Aleppo established well-respected seminaries which earned an international reputation; the yeshiva of Rabbi Moses Najara in Damascus where his son – the famous poet Rabbi Israel Najara – was a student; the yeshiva of Rabbi Yakov Abulafia whose students included Rabbi Yoshiyahu Pinto; and the yeshiva center of Torat Hasod – the Kabbalah founded by Rabbi Haim Vital, the greatest student of the Ari – where students included the kabbalists Rabbi Haim Hacohen, Rabbi Yakov Tzemach, who was also a doctor, Rabbi Yafet Mitzri, and many others. Sephardic spiritual leaders included Rabbi Yakov Beirav, the Laniado family – a famous rabbinic family who held positions of spiritual leadership in the Aleppo community for 300 years, Rabbi Moses Alshich, Rabbi Yehuda Katzin, Rabbi Mordechai Galante, and others.

Towards the 17th century, the hostility and conflicts between the two communities dissolved and faded away. After a century of living together in the Mediterranean environment, they came together to form a unified community. Portuguese and Spanish expellee communities adopted the local dress and language, and Spanish was almost never heard in their homes as it had been in the past. The Musta’arabi customs became dominant among the Sephardic Jews, though halachically and spiritually it seems that the Sephardic tradition won out among the Jews of Damascus. The Aleppo Jews, however, had supported the leadership of a local family of rabbinic judges for many generations, going back to the dynasty of the House of David.

Additional articles on Spanish exile communities in the diaspora:

Thank you to Mr. Jonathan Gavrielov for his help in researching and writing these articles.

Meet with an attorney who specializes in eligibility for Portugal passport

The law offices of Cohen, Decker, Pex, Brosh in Petach Tikvah and Jerusalem are at your service. If you possess proof that your ancestors were Portuguese or Spanish Jewish expellees, we will be happy to guide you through the process of obtaining Portuguese citizenship.