The Jewish Moroccan expellees represent Sephardi Jewish authenticity. This community of Jews who originated from Morocco display the most distinct form of the expellee culture. If you are of Jewish-Moroccan descent, you are probably entitled to a Portuguese citizenship!

After being expelled from Spain and Portugal, the Jews traveled to many countries, reaching even India, China and America. But the country which absorbed the largest number of expellees (between 20,000 and 40,000) was Morocco. For this reason, Morocco was also the country most affected by Sephardi Jewish culture. This influence is also noticeable to present day.

When the Jews moved from Spain to Morocco, these two countries reached an agreement. The agreement stated that Morocco will accept the expellees, and in return, will not be conquered by the rising Spanish Empire. The expelled Jews settled in Morocco, mostly in the cities of the north, such as Fes, Tetouan, Tangier, Rabat, etc. but also reached the valleys in the south stretching all the way to the Sahara. The large number of Sephardi Jews meant that they often outnumbered the local Jews, mostly in the cities. Thanks to their great intellect they earned a distinct status among the locals. 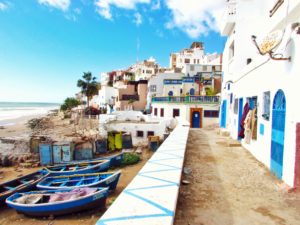 In Morocco, the Jewish expellees from Spain and Portugal mostly undertook unique professions. They were goldsmiths, traders, winery owners, profiteers, interest lenders (this profession is considered to be heresy under Islamic law) and more. The Jewish quarters, usually set close to the King’s palace, were called Malakh and were walled off on all four sides. When the Jewish expellees first settled in Morocco they took care to preserve their ancient customs from Spain. Their religious lifestyle was different than the local one. This manifested, among other things, in customs that relate to slaughter, prayers, and more. This situation often led to religious disputes among the populations and rabbis from each congregation would impose sanctions of the other.

The congregations also used different languages – the expellees in the northern cities used Spanish, which over time turned into Ladino. During the expulsion, the cities of north Morocco were governed by the Spanish Kingdom, leading the Jews in this cities to speak the lingua franca of the time. Over time, the local language received the Arabic name Khakitia – which comes from the Arabic word “to speak.” As time passed, the Moroccan local Jews and the Sephardi expellees integrated and became a single community led by Sephardi customs – in synagogues, Torah law, prayer, dressing, and more.

Additional information about the history and customs of the expellees from Spain:

Cohen, Decker, Pex & Brosh law firm specializes in immigration to Portugal. We are familiar with genealogists who can help you in the process of obtaining a Portuguese citizenship and passport. Here are some articles with relevant information about manners for obtaining citizenship and links to the expelled families. We thank Mr. Jonathan Gavrielov for his assistance in research and writing.

Contact us – descendants of the Moroccan expellees receive a Portuguese citizenship

If you have information proving that you are descendants of Spain and Portugal expellees – confirmation from a Sephardi community Rabbi, a genealogist’s report, and more – we can help you file an application. Contact an attorney in Jerusalem or Petah Tikva. The law firm of Cohen, Decker, Pex & Brosh is at your service.