The Spanish Jewish expellees in Sarajevo arrived in Bosnia in the 16th century, following the expulsion from Spain and Portugal. The Jewish communities in Bosnia (and in all of the former Yugoslavia) contributed significantly to the region’s culture and economy.

Descendants of Jews from the former Yugoslavia are eligible for a Portuguese passport. Portuguese citizenship means the right to enter more than 150 countries throughout the world without having to obtain a visa in advance. These countries include the U.S. and the various European countries, such as Britain, Germany, France, the Czech Republic, Holland, Italy, Sweden, Spain and more.

The law offices of Cohen, Decker, Pex & Brosh assist descendants of Spanish expellees and forced converts to obtain Portuguese citizenship. In this article, attorney Joshua Pex will describe the history of the Spanish expellee communities in Sarajevo. 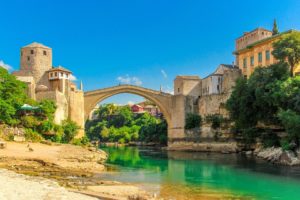 The city of Sarajevo was founded in 1461 by the Ottoman general Isa-Beg Ishaković. It was originally the largest among a collection of villages that were united into one city. Over time, Sarajevo became the second most important city in the Ottoman Empire, after Istanbul. At the beginning of the 16th century, Spanish Jewish expellees arrived in the city. Over time, they helped turn it into a flourishing center of life with a thriving economy and a prestigious standing throughout the Middle East and Europe.

Following the Alhambra order issued by the Spanish royal house in the summer of 1492, ordering all Jews to be expelled or convert to Christianity, an estimated 130,000 Spanish expellees arrived to settle in the heart of the Ottoman Empire, which welcomed them with open arms. The Muslim empire granted the Jews freedom to pursue whatever professions they chose. The expellees who reached Sarajevo mostly arrived via Salonica, but some came directly across the sea to the coast of Bosnia. Immediately upon their arrival in Sarajevo, the Jews became involved in trade under the Pasha Hadim Ali.

Not only did the Jews integrate rapidly into the new Bosnian population as successful merchants and craftsmen, they gained renown as the first pharmacists in the region, as well as experienced doctors. Jews in Bosnia were concentrated primarily in the capital city, Sarajevo, although there were also small Sephardic communities in other cities such as Travnik, Zenica, Bugojno, Banja Luka, and Mostar.

Upon settling in Sarajevo, the Sephardic Jews became the dominant community along the trade routes. They handled importing and exporting of goods from Italy, Turkey, Croatia, Greece, and the other Balkan countries. They traded in textiles, spices, and silk, among other goods. Sephardic Jews also worked in metalworking, shoe-making, tailoring, carpentry, textiles, glass, etc. An illustration of Sephardic Jews’ economic productivity is that they established the first sawmill in Sarajevo.

In 1577, with the growth of the Spanish expellee community in Sarajevo, the Pasha decided to grant a quarter to the city’s Jews, who called it “El Kurtijo”, meaning in Ladino “the Courtyard”. Four years later, in 1581, the synagogue “Kal Grande” (“Large Synagogue”) was founded, eventually coming to be known as the “Kal Viejo” (“Old Synagogue”), when a new synagogue constructed in the early 20th century took over the name of the older synagogue (“Kal Grande”). During World War II, the old synagogue was taken over and plundered, eventually becoming a prison and a warehouse. Today the old synagogue serves as a museum of Bosnian and Herzegovinian Jewry.

In general, Jews in Bosnia were treated with tolerance under the Ottoman Empire. The Jewish community was given religious, judicial, and civil freedom. There are records of a few cases in which Jews requested to be judged in the authoritarian Ottoman provincial courts, and were refused because of the rulers’ preference to stay out of Jewish affairs. In some cases the authorities even forced the petitioner to seek judgement in the rabbinic court. Over the years, five more Sephardic synagogues were built in Sarajevo, including one Ashkenazi one.

When it first started, the expellee community in Sarajevo relied on the center of Jewish law in Salonica, but eventually the community developed renowned rabbis of their own, such as: Rabbi Eliezer Papo, a community rabbi, adjudicator, and kabbalist; Rabbi Abraham Penso, who served as the head of the yeshiva and rabbinical court in Sarajevo; Rabbi David Pardo, the chief rabbi of the Sarajevo community, head of the yeshiva, commentator, adjudicator, and poet; and Rabbi Judah Alkalai, one of the first advocates of Zionism.

Shimon Leib Herzl, grandfather of the visionary of the Jewish state, visited Rabbi Alkalai at the synagogue when he was staying in Zemun (as a teacher for the Jewish population), near the city of Belgrade, and laid hands on one of the first copies of an article by Alkalai from 1857 – entitled “Return of the Jews to the Holy Land and Renewal of Jerusalem’s Glory”. Herzl’s application of modern Zionism was undoubtedly influenced by this relationship. The Israeli city Or Yehuda is named after Judah Alkalai.

Thank you to Jonathan Gavrielov for writing this article about Spanish Jewish expellee communities in Sarajevo, as well as other articles on Spanish and Portuguese Jewish communities and their expellees.

Contact us regarding Portuguese citizenship – Israeli attorneys at law

Our office assists the descendants of Spanish Jewish expellees in Sarajevo to obtain Portuguese citizenship. Make an appointment for a consultation with an attorney in Petach Tikvah or Jerusalem if you want to obtain a passport to a European Union member state.