Romantic relationships between Israelis and foreign citizens may go through different stages. Some couples are married or cohabiting, and others are just beginning their romance or are in a non-committed relationship. The Interior Ministry, the authority in charge of immigration to Israel, sometimes poses difficulties for Israelis who wish to invite their lover to Israel as a tourist, for a brief visit. Inviting a foreign partner for the sake of settling and living in Israel requires approval in advance. If your boyfriend \ girlfriend just wants to make a tourist visit, however, they can enter Israel without advance approval, because they will receive a tourist visa at the airport when they arrive. This assumes that the partner is from a “visa-free country” (a country whose citizens are exempt from obtaining a tourist visa in advance before visiting Israel).

However, Immigration Authority officials at the airport may refuse the foreign partner entry to Israel, even for a tourist visit, if there is a concern that they will illegally settle or work in Israel. Our firm, which specializes in immigration to Israel, has dealt with many cases like this. In this article, attorney Michael Decker will share knowledge from his years of experience in this field, and explain what the law says on inviting romantic partners as tourists to Israel.

The Cohen, Decker, Pex and Brosh law offices in Jerusalem and Tel Aviv specialize in immigration to Israel. Our firm offers comprehensive assistance to our clients with everything concerning immigration, for tourist visits, work permits, visas, and settling and living in Israel for foreign citizens from all over the world. 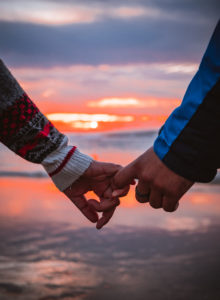 The modern age has created many new opportunities for connections between citizens of different countries. Online dating in particular has become widespread – many Israelis their significant others through dating applications or websites. In addition, Israelis travel overseas more often today than in the past. Often during their travels abroad, they become acquainted with foreign citizens and go on to forge romantic connections with them. Furthermore, social media platforms (such as Facebook and Instagram) and dating applications allow for connecting with foreign citizens without the need to physically leave the country.

Often the foreign citizens in question are from countries that are not visa-free (that is, countries not included in the list of exempt countries determined by the Entrance to Israel Decree), and they must arrange their visits in advance. In such cases, the foreign citizen must submit an application to the Population and Immigration Authority to receive permission for the visit. Such applications may be required even for citizens of visa-free countries, for instance in the case of citizens who have been refused entry to Israel in the past, or people who wish to stay in Israel for a longer time than a tourist visa allows.

When is the Interior Ministry authorized to refuse the visa applications of a foreign citizen?

The law and Interior Ministry regulations state that in general, if there is no concern that a foreign citizen will settle in Israel, they should be allowed entry. However, we have dealt with cases where Israeli citizens wished to invite their lover to Israel as a tourist, and the application was denied. Applications may be rejected due to concerns of infidelity (if the Israeli citizen is married or lives with a partner in a common-law marriage) or concerns about the foreign citizen settling in Israel illegally.

When the issue is a concern about infidelity, it is usually a case in which the Israeli partner lives separately from their official spouse, but is still registered as married. For example, an Israeli couple lives separately but out of mutual respect, for religious reasons or for the sake of the children, they have chosen to remain in a formal marriage. Then one of the partners applies to the Population and Immigration Authority to invite a foreign citizen with whom he or she is in a romantic relationship. The request is denied, despite there being no concern of the foreign partner settling in Israel. It is important to note that even if such an issue arises, it can usually be resolved by making a financial deposit to guarantee that the foreign partner leaves Israel at the end of the visit.

What can be done if an application is rejected?

The Interior Ministry has a set procedure for appealing decisions of the Population and Immigration Authority. The procedure allows for the filing of an internal appeal on decisions to refuse entry to a romantic partner as a tourist. Beyond the internal appeal, it is also possible to appeal to the appellate court on issues of entrance to Israel. Rulings of the appellate court may be appealed in the Administrative Affairs Court. The courts will investigate whether the Interior Ministry decision was deficient in any way, and they are authorized to intervene and change the decision accordingly. Aside from the options for appeal, our firm has represented cases like these before the Interior Ministry, and has helped find creative solutions for Israelis who have a romantic relationship with a foreign citizen and want to invite their romantic partner to Israel as a tourist.

Contact a lawyer who specializes in Israeli immigration law

In conclusion, inviting a romantic partner to Israel as a tourist is legally possible, but the Interior Ministry may refuse the application. If the Interior Ministry poses difficulties on this issue, there are several ways to appeal Ministry decisions. For any question or legal issue that arises, you can contact us and an attorney from our offices will be glad to help. The Cohen, Decker, Pex and Brosh law offices in Jerusalem and Tel Aviv specialize in Israeli immigration law and assistance in inviting tourists to Israel.