Descendants of Holocaust survivors or victims: 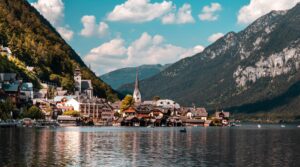 Austria has had an extensive connection with Jews that dates back to 3rd Century A.D. Jews are believed to have migrated to Austria after Romans occupied Israel. After the Anschluss in 1938 when the Nazis annexed Austria, all Jews were forced to leave the country. The process of leaving, however, was not easy. Not only did Jews have to have numerous documents that approved their departure, but they had to pay a ‘departure tax’ that was a huge percentage of their property. Visa to other countries was hard to obtain which meant many had to leave behind their grandparents or parents. The last of the Jews are believed to have left Austria in 1941.

With over 200,000 Jewish inhabitants, Vienna ranked sixth in the world in terms of Jewish population in the 1920s.  By 1939, many Jews emigrated out of Austria and their numbers declined to 57,000. Today the Jewish population of Austria is estimated to be just above 10,000.

This is one of the most common ways of getting Jewish Austrian citizenship or European citizenship for Jews. Austrian citizenship law has provisions where people who live in Austria continuously for specific periods of time can apply for citizenship by naturalization. For spouses of Austrian citizens, a period of six years is the minimum residence requirement for naturalization. For others, the minimum period of uninterrupted residence in Austria is ten years, five out of which has to be with a Residence Permit. Apart from residing continuously for ten years, the individual also has have a clean track record, have sufficient financial means and a steady income, have adequate knowledge of German and be integrated professionally and personally within Austrian society.

For Jews who do not meet any of the above criteria, another pathway of European citizenship for Jews is by making an investment. Many European countries such as Bulgaria, the Netherlands, Portugal and Greece have citizenship by investment programs. By making a contribution to the country’s economy, it is possible to get European citizenship for Jews. Austria, also has a similar program where Jews can invest in Austrian company or start a company in Austria with a minimum investment of EUR 50,000. This pathway is ideal for wealthy individuals and for those with good entrepreneurial vision and experience.