Many Jews and descendants of Jews have the goal of making Aliyah to Israel, returning to the land of their forefathers. Some want to want to make the Holy Land their home for religious reasons or due to Zionist ideals. Still others come to escape persecution in their home countries. However, Aliyah has some possible drawbacks, which this article will describe. After understanding some of these drawbacks, some contemplate canceling Aliyah.

The law office of Cohen, Decker, Pex, Brosh specializes in immigration and relocation to and from Israel. We assist our clients with proving their eligibility to make Aliyah, immigrating alongside their immediate family. We help Israeli citizens bring their spouses and parents to Israel. Conversely, we also help Israelis immigrate abroad, to the United States, Portugal, Canada and Britain. If you’re having second thoughts about immigrating to Israel in the middle of your Aliyah process, this article has the information you need. 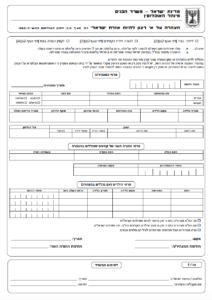 The prospects of receiving immediate citizenship along with financial benefits, 6 months of free intensive Hebrew courses, and free education for one degree (as long as they make Aliyah before the age of 30) sweeten the pot for prospective immigrants. The current, updated list of Aliyah benefits for new immigrants (olim chadashim), can be found here.

These benefits make the decision making a little bit easier, and many make the leap to their new homeland knowing these incentives will cushion their landing. These benefits attract many of those who are eligible for Aliyah. However, once they learn of their obligations, some wish to retract their attempt to gain Israeli citizenship.

Despite all the benefits that new immigrants may receive when they receive Israeli citizenship, there are some significant drawbacks as well. Israel has a high value-added tax (VAT) rate of 17%, which applies to any transaction executed in Israel. National Insurance (Bituach Leumi) fees are also withdrawn from income at a high rate, even for independent contractor businesses.

In addition, every person must also pay property tax (arnona) on the apartment / house / property they are renting. This is valued based on the size of the apartment, as well as the city and neighborhood in which a person resides. Even though new immigrants are given a large discount of 70-90% on arnona in their first year or two, the full weight of the property tax will come upon them afterwards.

On top of all the financial ramifications of permanently living in Israel as a citizen, there is also mandatory military service. Young adults under the age of 30, especially if single, may be called upon for military service in the IDF for 2-3 years.

Initially attracted to immigrate to Israel from ideals and financial incentives, some new immigrants decide it is less advantageous to hold Israeli citizenship than they originally thought. In order to avoid these difficult obligations of a citizen, they must renounce the newly acquired citizenship. But is canceling Aliyah even possible?

There is a possibility of giving up citizenship once acquired, although within specific time constraints. If the applicant for Aliyah realizes that the financial or social burdens are too much to take on, they have 3 months to backtrack. Within those 3 months, that new citizen may revoke their Israeli citizenship without having to fulfill any of the obligations usually involved with canceling Israeli citizenship.

This framework comes from Section 2 of the Citizenship Law, which states:

“To a person of full age who, immediately before the day of his Aliyah or immediately before the day of the issue of his oleh’s certificate, was a foreign national and who, on or before that day or within three months thereafter and while still a foreign national, declares that he does not wish to become an Israel national; a person as aforesaid may, by written notice to the Minister of the Interior, waive his right to make a declaration under this paragraph;”

So, as we can see, there is the possibility of canceling Aliyah. In addition, you can still work and live in Israel without the burdens of being an Israeli citizen. This can be done even if you are eligible for Aliyah under the Law of Return. You can learn more about this here.

So there is a way to undo what has been done. If you need to retract your Israeli citizenship, contact us. If you are unsure as to what to do, if you need legal advice to weigh the pros and cons, we can help advise you through this process.

At the law offices of Cohen, Decker, Pex & Brosh we handle all types of immigration requests, even requests to backtrack immigration. Our lawyers can help you in the process of withdrawing your application with no harm done and no obligations left unmet. We understand the difficulties of immigrating to Israel, and we are here to help you every step of the way. Contact us for guidance, we most are happy to help.