How do I get a re-entry visa to Israel? Every foreign citizen, legal foreign worker, refugee, or other non-resident who needs to leave Israel and return, is required to obtain a re-entry visa in order to enter back into Israel. This visa is a way to ensure that the visitor will be allowed to return to Israel after he has been abroad. Cohen, Decker, Pex and Brosh, an Israeli immigration law firm with branches in Jerusalem and Petah Tikva, specializes in issues related Israeli visas. This article by Advocate Joshua Pex will explain who can obtain a re-entry visa to Israel, how, and for how long.

A visa for re-entry into Israel is intended for foreign workers and visitors staying in Israel with a legal long term visa. Specifically, the Population Authority procedures regarding a re-entry permit refer to foreign workers who have a B\1 work permit, or a B\2 permit for foreign workers in the nursing field – workers who wish to leave Israel for a short period and re-enter back to Israel. The purpose of the departure may include vacation in the worker’s homeland, travel abroad, dealing with family concerns back home, and more. In any event, the worker needs a re-entry visa to Israel. This visa in the passport is additional to the work visa and must be presented at the border crossing upon entrance to Israel in order to avoid arrest and deportation.

Who can not obtain a re-entry visa to Israel?

The re-entry visa is not intended for:

Tourists with a B\2 entry visa, who can exit Israel and re-enter back as tourists, as long as they don’t raise the suspicion of border control employees regarding unlawful immigration or illegal settlement in Israel.

Illegal workers, or other visitors who reside in Israel without an entry visa.

Asylum seekers who are yet to receive status in Israel. Only those who have received official refugee status and a temporary resident visa are entitled to return to Israel after leaving the country

Foreign nationals who are in the early stages process of receiving a permanent legal status in Israel (before receiving a B\1 visa). For example, a person who is in the midst of obtaining status on the basis of marriage or cohabitation with an Israeli citizen. However, with the help of an attorney who appeals to the Ministry of the Interior, a re-entry permit can be obtained for the purpose of arranging family matters or a divorce abroad in certain specific cases.

How do I apply to receive an inter-visa? 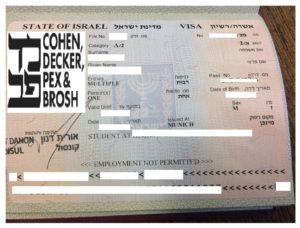 The foreign worker must schedule an appointment at the Population Administration office nearest to his place of residence. He must bring along his Israeli residence permit / work visa (valid for at least 90 days from the date of submission of the application), passport (valid for at least one year from the day of departure), an (up-to-date) passport photo and the AH\1 form for obtaining a visa (The latter can be obtained on the spot, but it is better to print one out and bring it along to save time)

In addition, the worker is required to bring a letter from the employer \ office \ corporation for which he or she works. In the case of a caregiver, the employer or a member of the employer’s immediate family, must be present in person during the application process. The letter provides permission for the worker’s exit and re-entry, the purpose of the visit and the dates of entry and exit, in addition to a stated commitment to continue employing the worker after the return to Israel. A caretaker does not need to bring a letter from the employer, but it is possible that the employer or relative who is required to accompany the worker, will  be questioned during the process.

A re-entry visa is valid for:

In most cases, the validity of Inter-Visa is 90 days at most, from the date of departure, and sometimes less – depending on the stated purpose of the trip out of Israel. In addition, the validity of a typical re-entry visa is for exactly one re-entry into Israel, after which the visa must be renewed. However, volunteers with a letter from the organization for which they serve, temporary residence permit holders, and foreigners entitled to make Aliyah according to the law of return – 1950, may be able to receive a multi-entry visa for several departures

In the event that the employee’s residence / work permit is valid for less than 90 days from the submission of the application, the application shall be forwarded to the Director of the Ministry of Interior Office (Misrad Hapnim) in which it was submitted. If the worker is unable to present a letter from the employer due to various circumstances, the application will be accepted or rejected on the basis of the decision of the Employers’ Administration. In the event that a caregiver travels abroad, a private bureau is entitled to provide an alternative caregiver for the patient. The Israeli Immigration & Population Bureau clerk may reject the application on the basis of the impression that it is being used for the purpose of extending the residence permit in Israel, or to provide for the unofficial entry of other visitors.

The return to Israel of a foreign worker who had traveled abroad and due to various circumstances (bankruptcy, dismissal) no longer has an employer, is not permitted.

Contact the law firm of Cohen, Decker, Pex and Brosh, in Jerusalem and Petah Tikva, for information and legal advice in regard to entry and exit from Israel.