Many couples seeking to register their marriage in Israel are not aware that a number of countries will allow them to conduct a marriage in the absence of one or both of the partners. What is the procedure for civil marriage by proxy, and what is the validity of such marriages in Israel?

The law office of Cohen, Decker, Pex, Brosh is experienced in arranging legal status in Israel and representing clients before the Interior Ministry.

When does the need arise for a civil wedding in the absence of one or both partners?

Israeli law only recognizes a marriage performed under religious law, between two people of the same faith — Jews or members of another faith, such as Christianity or Islam. A civil marriage performed in Israel has no legal validity, and will not be registered. A civil 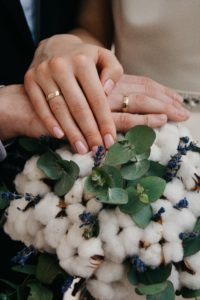 marriage performed in a foreign country, however, can be registered in Israel if it is valid under the laws of the country where it was performed. Accordingly, couples who do not wish to marry according to Jewish religious law get married outside Israel; in countries such as Cyprus or the Czech Republic.

Unfortunately, some couples may not have the capability to travel to a foreign country where they can marry. A common case is a mixed couple (one Israeli and the other a foreign citizen), wherein the foreign partner’s visa does not permit him or her to leave Israel and then return. In other cases, the Israeli partner is prevented from leaving the country, for example due to outstanding debt. In such cases, couples who wish to get officially married and register as such may choose the path of marriage in the absence of one or both of the partners.

How is it possible to perform a civil marriage in the absence of one or both partners?

The marriage is performed by granting power of attorney to a proxy in the name of the missing spouse(s). Therefore, such marriages are known as “marriage by proxy”. There are several places in the world where local laws permit such marriages.

What is the legality of such marriages in Israel?

The State of Israel is required to list civil marriages that were legally performed in foreign countries in its marriage registry. Applicants must present all marriage documents (the marriage license and the protocol), verified, translated, and certified by a notary’s stamp. It is crucially important for a couple to make sure that they possess all the necessary documents, complete and legally valid. To this end, it is advisable to obtain the services of a professional lawyer with experience in this area.

Note, however, that various legal issues may arise following a single or double proxy marriage. In the past, double proxy marriages were not recognized by the Interior Ministry. An appeal to the Supreme Court led to obligating the state to register such marriages. Even so, despite registering the marriage, the Interior Ministry will generally apply to mixed-faith couples the protocol for common-law couples. This process, as a rule, takes more time than the parallel process for married couples.

Mixed couples married by proxy who want to register with the Interior Ministry may also face another issue: a possible claim that the relationship is insincere. This is a central cause for rejecting applications for legal status. It is important to know, however, that a rejection based on these grounds may be appealed. After examining the case in detail, the judicial system may intervene and overturn the rejection of the couple’s application.

Contact an attorney with expertise in Israeli immigration law

To summarize, civil marriage is definitely possible, even without the presence of one or both parties. If you have additional questions or are seeking assistance in the procedure of civil marriage, we will be happy to help. At the law offices of Cohen, Decker, Pex, Brosh you will find attorneys with expertise and extensive experience in assisting and representing foreign spouses of Israelis throughout the process of immigration and naturalization in Israel. Our offices provide ongoing assistance to couples seeking to register their civil marriage at the Population Authority and on an Israeli ID card.

The importance of a genealogist for obtaining foreign citizenship