Additionally, there are more regulations regarding applicants with an Israeli military background. The article linked above will explain the difficulty they may face in obtaining Austrian citizenship.

Obtaining Austrian citizenship for Holocaust survivors and their descendants is easier with the help of experts in the immigration field. The immigration law offices of Cohen, Decker, Pex and Brosh specialize in obtaining the passports of Austria, America, Canada, Portugal, England and more. We will be glad to assist you in obtaining Austrian citizenship under the new law. 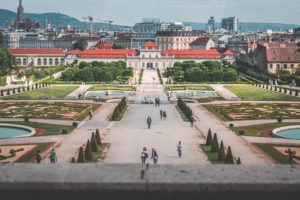 Who is eligible to receive Austrian citizenship?

Many Jews were forced to give up their Austrian citizenship between the years 1933-1938 due to Nazi Germany’s takeover of the Austrian Republic. Up to the year 1938, the year of Austria’s official annexation to the Nazi superpower (the Anschluss), thousands of Austrian Jews left their homeland, which had become a hostile country to them.

Today Austria recognizes the injustice suffered by its Jews, former citizens. As of September 2020, he descendants of Holocaust survivors who left the country between the years 1933-1955 are eligible to apply for Austrian citizenship, without fear of having to give up their existing citizenship, as they did in the past.

Note that, unlike the preceding law which granted Austrian citizenship to descendants under the condition that their ancestors left Austria by 1945 (the end of the war), the new law extends the time period to 15.5.1955, taking into account the many widows and widowers, orphans, and people who had gone bankrupt who remained in Austria many years after the war ended, without the financial means to move elsewhere.

Another important point to emphasize — if you are a descendant of a Jew who left Austria even before the year 1933, you have the possibility of appealing and obtaining Austrian citizenship. This is because there are exceptional cases which warrant consideration due to similar justifications.

Can an Israeli with a military background apply for Austrian citizenship?

Mandatory army service (called regular service) in the IDF does not pose a hindrance to obtaining Austrian citizenship.

However, according to the Austrian supreme court ruling, voluntary service or career army service in any foreign army, including the IDF, poses a reason for nullifying the application and/or refusing to grant Austrian citizenship.

That being said, it is important to note that due to cautionary political measures, these rulings by the Austrian supreme court were made specifically for applicants with an Austrian-Israeli connection who served in the army in career positions (voluntary service) upon completing their mandatory 3 years of service. However, it may be possible to appeal this decision and the applicant – the person serving in a career army position – will be examined in light of the new amendment.

Reserve army service is not considered voluntary, and therefore applicants who do regular annual reserve duty in the army are eligible for Austrian citizenship.

What proof is required to be eligible for citizenship?

You must prove that you are related to a parent, grandparent or great grandparent, etc., who was persecuted by the Nazis. In addition, you will be required to prove a familial relation between the relative considered the persecution victim and anyone filing the request (children, partners etc.)

Relevant documents when applying for an Austrian passport

The process of obtaining Austrian citizenship does not entail any fee, and neither does the process of submitting the documents for it. There is also an exemption from administrative fees. Take into account that the Austrian government office may require additional documents as they see fit.

All marriage and birth certificates must be presented with an attached apostille stamp or legalization by an embassy.

Our thanks to Mr. Jonathan Gabrielov for his help in writing this article.

Our office files applications for Holocaust survivors who were forced to emigrate from Austria in the 30s, due to their deteriorating situation and the rising antisemitism under the influence of the Nazi regime. If you are a child or grandchild of Holocaust survivors from Europe (Italy or Hungary) or Eastern European (Serbia, Croatia, Slovenia, Moldova or Romania) who lived in Austria but chose to flee the country, you are eligible for Austrian citizenship and our offices can help you get it. We will be glad to arrange the process of obtaining Austrian citizenship for you under the new law.