How can I work in Israel without making Aliyah?

The law firm of Cohen, Decker, Pex, Brosh specializes in immigration, visas, and Aliyah to Israel. As we help obtain Israeli work visas for foreign specialists, members of the general public often ask us “How can I, as a non-Jew, work in Israel”?

In this article we will explain the laws and practical process involved in obtaining a foreign worker visa in Israel. We will also answer the question – can someone not entitled to immigration under the Law of Return work in Israel without special qualifications?

To begin with, it is important to emphasize that in Israel, a foreign citizen does not receive a work visa as a permit to enter the country and start looking for an employer. The process is the opposite – a company in Israel submits an application to the Interior Ministry to bring a foreign worker to Israel. The employer is required to prove that a foreign expert is required, because it is not possible to find an Israeli worker to fill the position. After obtaining principle approval, the company also has to prove the specific foreign worker chosen has the skills required for the position.

The question may be muddled because immigrants, spouses of Israelis, and certain asylum seekers have the right to seek any employer in Israel. But all of the above don’t enter Israel as foreign workers, but as citizens, temporary residents, or quasi-temporary residents.

There are several categories of foreign nationals who work in Israel. They have different types of visas (if any) and arrive in Israel in different ways.

Types of foreign workers in Israel 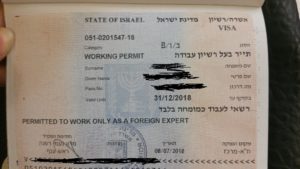 First, foreign workers in “difficult” employments where there is a permanent shortage of Israeli workers. The State of Israel “imports” many workers in the fields of agriculture, nursing and construction. They receive work visas in cooperation with the brokerage of local human resources companies, as detailed below.

Second are foreign experts, hired by specific Israeli employers, usually in the high-tech, industrial or technology sectors. These workers are required to meet high pay requirements. Their employer must prove that it is difficult to find local Israeli workers who can perform the duties of the foreign specialist.

Third, international companies can send specialist workers to open or expand a branch of their business in Israel.

Fourth are asylum seekers or “economic infiltrators”, who are sometimes mistakenly called “foreign workers”. Despite their relatively small number in Israel, they receive a great deal of public attention. It is important to emphasize that asylum seekers in Israel do not receive work visas. However, in accordance with the Supreme Court ruling, some may work in Israel without a work permit while their application is being processed by Israeli immigration authorities.

Fifth, foreign nationals who choose to work in Israel illegally. They usually enter the country as tourists from the former Soviet Union, or as pilgrims in tour groups from African or South American countries. Having entered Israel, they “drop out” and seek illegal employment. These foreign nationals risk being expelled from Israel, and employers in Israel risk high fines for illegal employment of foreigners without a work visa.

Sixth: US nationals can establish a business in Israel and reside here based on the B-5 business visa. US nationals employed by the business and the spouses / children of the investor / employees receive B-5 visas sub-types to live and work in Israel.

How do I get a visa as an expert foreign worker?

As mentioned, an Israeli employer must require your unique skills. The same employer must contact the Ministry of Interior and prove (usually with the help of a lawyer) that:

A) Their business needs an employee with knowledge / expertise / skills that are hard to find in Israel.

B) That employing the foreign expert in the company will contribute to the growth of the business, the employment of more Israeli workers, and the development of Israeli economy.

The application for a permit to hire an expert foreign worker costs about NIS 1,200. If the Ministry of Interior agrees to issue the visa, the employer must pay a fee of NIS 10,000 to receive it. Finally, the expert worker must be paid at least twice the average salary in the Israeli work market.

Is a specialist work visa restricted to hi-tech workers?

Not necessarily. True, most of the expert workers come to Israel to work in major companies, to promote a specific project. There are also foreign workers who undertake managerial position in an Israeli company or as representatives of international companies.

But anyone with unique expertise which is hard to find in Israel, but is required by a business that is willing to invest the money and effort, can receive this visa. Foreign experts in Israel occupy such diverse employments as chefs in ethnic restaurants, animal trainers, and athletics coaches. Small companies can also get permission to bring a foreign worker to Israel for a long or short period.

On the other hand, Israel does not suffer a shortage of most professions, such as: lawyers, language teachers, and journalists. Even with a diploma from the most prestigious university, and excellent qualifications, if there is no need for employees in a particular field, it will be impossible to obtain a foreign expert work visa.

So my friend / relative, a business owner in Israel, can arrange a specialist work visa for me?

The law does not forbid business owners in Israel to bring a relative or friend as foreign worker to Israel. However, they must prove that the foreign worker has unique knowledge or skills that cannot be found in Israel.

What about foreigners without unique skills?

Can a person who has no chance of receiving a job offer from an Israeli company still find employment Israel? The State of Israel also provides a large number of work visas to foreigners who are not expert workers, in agriculture, construction, and nursing.

These foreign workers are recruited abroad by Israeli companies that specialize in the field. Agriculture workers come mainly from Asian countries, and nursing workers are mostly nationals of the Philippines / former USSR. These workers are not required to demonstrate unique expertise, but must prove that they do not have a criminal record, have not been refused entry to Israel in the past, and have not sought asylum in Israel.

So I have to apply for asylum to work in Israel?

This is the course of action considered by many applicants who cannot get a job offer from a company in Israel and are unable to get a work visa through a company in their country of origin. At this point it is important to emphasize some matters of consideration; some practical and some moral.

Due to the number of economically motivated “asylum seekers” who only want to work in Israel, the policy of processing asylum requests is rapidly evolving. As of 2019, asylum seekers from Georgia, Russia and Ukraine are automatically refused.

Even spouses of Israeli citizens, descendants of Jews who discovered their roots and are eligible for Aliyah, and others with a legal right to enter Israel, will find it difficult to exercise this right after applying for asylum and leaving the country.

Applying for asylum for economic reasons – the moral perspective

False asylum seekers encourage Israeli border control and Ministry of Interior officials to suspect their fellow citizens. The false application also harms relations between the countries, as tourists who have no desire to seek refuge or work illegally in Israel are deported based on suspicions.

This pretense and suspicion also harms genuine asylum seekers. Those who are in fact persecuted in their own country because of their political identification, religious beliefs, sexual orientation, or ethnic affiliation may be denied refugee status.

It’s worth repeating a well known quote by the Dalai Lama. On the one hand, indeed, every state has the moral obligation to provide shelter to those persecuted for their beliefs. But the top priority of a refugee must be the return to their country of origin and contribute to improving the situation in their homeland.

If an employer in Israel wishes to issue a specialist worker’s visa to a foreign citizen, the law firm of Cohen, Decker, Pex Brosh is at your service. Call a number below to schedule a meeting with an immigration attorney in Jerusalem or Tel Aviv.