Spanish Jewish expellees emigrated to England over the course of decades after the expulsion from Spain and Portugal. They arrived as Britain began its meteoric rise towards becoming the largest empire the world had ever seen. The prosperous expellee communities helped shape the economy of the British Empire and developed world-wide trade routes throughout the empire on which “the sun never sets”. 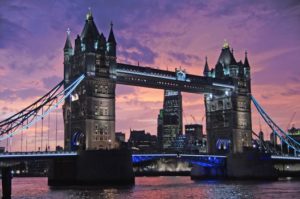 The Spanish Jewish expellee communities, that first came to England before 1500, constituted no more than 100 families. Jews were not legally permitted to settle in England at this time, having been banned entrance since the great expulsion order signed by King Edward I in 1290. However, special permits to settle in England were granted to certain Jews fleeing pogroms in France, Hungary, Spain, and Portugal. These Jews did not receive full rights, nor were they allowed to own real estate. This prevented them from establishing synagogues, and thus they gathered to pray in private homes. The small expellee communities settled in London and Bristol, both important port cities in the British kingdom.

The Bristol Jewish community enjoyed a higher status than the London one because its members represented more free professions such as: medicine, garment export (considered a business for noblemen), banking, and trade. An example of an educated Jew was Rodrigo Lopez who arrived in England as a Portuguese forced convert from Holland. He served as Queen Elizabeth I’s personal physician, and was eventually executed as a traitor. Another well-known English Jew was the famous banker and activist Moses Montefiore. For the first 150 years that the Spanish expellees settled in England, they chose to live almost as secret Jews, fearing that openly displaying their Jewish identity on the streets of London or Bristol would alienate the English.

Repeal of the 1290 Edict of Expulsion

In November 1655, one of the most well-connected Jews of his generation, Menasseh Ben Israel, entered the diplomatic arena. Ben Israel was Dutch, from a Portuguese expellee family. With his connections to royalty and members of Parliament throughout the Western world, and particularly in England, he succeeded in convening a governmental conference with England’s ministers, including Oliver Cromwell.

Members of the Whitehall Committee, discussed the process of recognizing renewed Jewish settlement in England. Lord Chief Justice of England and Wales, Sir John Glynne, and the Minister of Finance, William Steel, claimed that “there is no law banning the Jews from returning to England”. The two based their claim on a royal order issued by the King but not passed by the Parliament. The Sephardic Jewish community eventually received official recognition from King Charles II in 1660. Hereafter, Judaism was recognized as a protected religion with increased rights regarding purchase of real estate. The Sephardic Jewish community in England would develop slowly. Most Sephardi immigrants came from Holland, England’s neighbor and rival.

Official Status of Jews in England

After the death of King Charles II in 1685, anti-Semitism again raised its head in England, particularly among the educated class. In that year, accusations were brought against the Jews of Sephardic Dutch ancestry, who were conducting trade directly with the hostile Low Countries. Jews were accused of treason against the kingdom, violating the law, absence from church, harming the King’s custom duties, and harming trade, among other charges. Though widespread, these accusations apparently did not limit the Jews either socially or economically; by the end of the 17th century, additional Sephardic Jews had joined the London Jewish community, and the Jewish population totaled 1250 (800 Sephardi and 250 Ashkenazi Jews). Solomon De Medina, the first Jew to be knighted in England, was of Sephardic extraction.

In 1698, the Portuguese Sephardic community in London came together and decided to build a synagogue for the entire Portuguese Sephardic community. Up to then, they had suffered from crowding and lack of space in their place of prayer, which was the home of Rabbi David Nieto (the religious judge of the community as well as a philosopher and doctor). Accordingly, in 1701, the magnificent Sephardi synagogue was built, named after the street it was built on, Bevis Marks. The Bevis Marks synagogue has been operating continuously since its establishment in 1701, making it the synagogue with the longest active life in Europe.

We hope that this information on various communities will help you to clarify your eligibility for a Portuguese passport. Thank you to Mr. Yehonatan Gavrielov for his assistance in writing the articles.

Contact an Attorney Regarding Emigration to Spain and Portugal

The law firm of Cohen, Decker, Pex & Brosh has more than 30 years’ experience in the field of emigration law. The office maintains contacts with the Portuguese Jewish community in Lisbon and in Porto, who issue the certification letter required to make the bearer eligible for a Portuguese passport. We will be happy to carry out a free, immediate eligibility check for you – call to make an appointment with an attorney in Petach Tikvah or Jerusalem.