There are currently over 3 million Israeli Jews who are eligible to Portuguese/EU citizenship, as their ancestors hail from countries that received exiled Jews of the Alhambra Decree (the expulsion of the Spanish and Portuguese Jewry), of the 15th century. These countries include Morocco, Algeria, Tunisia, Greece, Bulgaria, Romania, Syria, Iran, etc. Portuguese Citizenship has many benefits and opportunities, and it provides a better future in many aspects. Receiving a Portuguese passport for Sephardic Jews is currently possible and involves almost no effort, compared to the issuance of a Spanish passport.

In this article, Adv. Michael Decker will demonstrate how obtaining a Portuguese passport for Sephardic Jews became easier if you have a Sepharadi origin, Mizrahi origin, and even Yemenite or Ashkenazi origins. Our office has a great deal of expertise in proving our clients; surnames, traditions and family trees prove Jewish-Sepharadic connections. We can help you to obtain a Portuguese passport, provided you have a connection to Jews who were expelled from Spain by the Alhambra Decree.

Portuguese Passport – Who is Entitled? 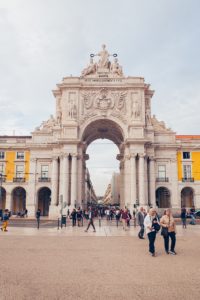 A Portuguese passport carries various benefits in the European Union (EU) countries and enables entry to over 170 countries. Descendants of Jews who were expelled from Spain/Portugal may apply for a Portuguese passport, as long as they meet the requirements that are elaborated on below.

On our website you will find dozens of articles that elaborate on the different surnames, together with the expanded name list which was published by the government of Portugal. These surnames are recognized as eligible for a Portuguese passport by the Jewish community of Portugal.

It should be emphasized that even if your surname does not appear on our website or on the name list, it does not necessarily mean that you are not eligible for a Portuguese passport. Many names have been changed throughout the years or went through a civilizing process. In such cases we would recommend contacting our offices, that already proved family connections to Sepharadic Jews in cases where even our clients couldn’t believe it.

What are the Countries Whose Descendants are Eligible to a Portuguese Passport?

Please note that there is a published list of countries descendants of emigrants from which may be eligible for a Portuguese citizenship. These are the countries where Jews who were expelled from Spain have settled throughout the centuries. For that reason, the chances of those descendants to obtain a Portuguese passport are high. Here are the names of those countries – Morocco, Algeria, Greece, Tunisia, Serbia, Libya, Macedonia, Albania, Turkey, Egypt, Bosnia, Croatia, Syria, Lebanon, Netherlands, Bulgaria, Iraq, Romania, Italy, Jamaica, Brazil and Argentina.

Thus, if your family comes from one of these countries and you have a surname that can be found on the list of Jewish-Sefardi surnames, you are probably eligible for a Portuguese passport.

Moreover, there are other places where Jews who were expelled from Spain have reached – such as Eastern Europe, Iran, Central and South Africa, South America, Australia, England and so on. However, in those countries, Sepharadic Jews were a minority. Thus, the proof of their eligibility is supposed to be somewhat more complicated compared to the countries listed above.

Preconditions for Obtaining a Portuguese Passport

Spouses of an EU passport holder will be able to apply for a Portuguese passport only after 3 years of marriage.

How to Begin with the Process of Obtaining Portuguese Citizenship?

In order to initiate the process of issuing a Portuguese passport, we will first need to review:

With this information our offices will conduct for you a test of eligibility for a Portuguese passport, free of charge. Should you be found eligible, we will be able to proceed along with the process for obtaining the desired passport. Our offices will of course accompany you throughout the process, until its completion.

After Receiving a Letter of Recommendation

Having started the process, you will be asked to present additional relevant documents, such as:

Essentially, the beginning of the process involves collecting evidence indicating a connection between the applicant and Jews who were expelled from Spain, or more precisely, a Sepharadic connection. Applicants are required to collect documents, such as ancient Jewish marriage contracts (Ketubah) that have passed down through their family; Sepharadic surnames throughout the generations; religious traditions; rituals, ancient religious texts; proofs of connection to the Sepharadic community in the present; and so on.

After collecting the evidence and arranging the different documents, we will submit them to one of the Jewish communities of Portugal, that are situated in Porto and Lisbon. The submitted documents must show a proof of your Sepharadic affinity. If the community recognizes you as Sepharadic, the final stage of the process, receiving a Portuguese passport, will begin. At this stage we will arrange all the documents and send them to the government authorities in Portugal. No effort will be needed from you, and you could simply wait for the passport.

The timeframe for obtaining a passport from the beginning of the process is approximately a year and a half. In some cases it may take 2 years.

We thank Mr. Jonathan Gavrielov who wrote this article.

Contact Us to Check Your Eligibility to a Portuguese Passport

Our offices specialize in the area of issuing a Portuguese passport for Sepharadic Jews. We can assist you with familiarizing a Sepharadic connection in your family, should it exist, thanks to the experience we have gained in this area. We will be happy to answer any question, via the phone numbers listed below.