The State of Israel Is Not an Immigration State

It is important to remember that Israel is not based on immigration. There are countries such as the United States and Australia that have valued immigration from the start and were even established by immigrants.

We are all familiar with the Statue of Liberty, which stands on an island near New York City, symbolizing America’s call to welcome all immigrants looking for a better life in the United States. At the foot of the statue is engraved a poem by a Jewish woman poet which speaks of “huddled masses” who will flow to the land of the free, regardless of race or religion. In contrast, Israel was founded, in accordance with the decision of the international community, to serve as a national home for the Jewish people, and is defined today as a Jewish democratic state.

Therefore, Israel gives preference to the immigration of Jews and their descendants and relatives. However, Israel is still part of an increasingly global world where immigration is often practiced. Israel is committed to international conventions, and a significant portion (20%) of the Israeli citizen population are non-Jews. Israel’s immigration policy has evolved accordingly over the decades.

The Interior Ministry is the Authority Responsible for Immigration to Israel

The Minister of Interior and his representatives are the government authority responsible for implementing Israel’s immigration policy. Israel, as mentioned above, is not based on free immigration. However, as a modern state that is part of the “global village”, immigration and emigration are part of the reality in Israel. Israeli immigration laws open the gates of the State mainly to Jews and their descendants and relatives. However, it is also possible to obtain citizenship on the basis of family relations with Israeli citizens; for example, spouses of citizens who live in Israel are entitled to receive citizenship, as well as single parents to Israeli citizens who are not entitled to immigration.

Immigration to Israel on the Basis of the Law of Return

The Law of Return stipulates that every Jew is entitled to immigrate to Israel and receive Israeli citizenship. Israel easily and efficiently accepts immigrants who can prove that they are Jews or relatives of Jews. Applications for Aliyah (immigration of Jews to Israel) are made through the Jewish Agency abroad. A foreign citizen may also apply for Aliyah at the Ministry of Interior after entering Israel as a tourist or holding an A/1 visa.

Children and grandchildren of Jews (even if they are not Jews themselves) also have the right to immigrate to Israel and receive Israeli citizenship on the basis of the Law of Return, together with their spouses and minor children. Also lawful converts to Judaism have the right to immigrate if they have received a conversion certificate from a recognized Jewish community.

Who might have problems in the immigration process? There are many inidviduals who know that their family is Jewish but have difficulty obtaining documents to prove it. Also, eligible immigrants with a criminal record will have to prove that they are not a danger to public safety. Finally, Jews who have converted to another religion  are not eligible to immigrate to Israel. A lawyer specializing in immigration to Israel can help you with any problem in the immigration process, vis-à-vis Interior Ministry officials, Jewish Agency representatives abroad, and the courts.

What Are the Ways to Obtain Israeli Citizenship for Those Who Cannot Prove Jewish Affiliation?

First, Israeli citizenship is transferred from parent to child. Children whose mother or father is an Israeli citizen are citizens from the day of their birth. The Interior Ministry sometimes requires a tissue test to prove paternity of a newborn if the parents are not married, if the birth occurred less than 300 days after the marriage, or if there are other problematic circumstances.

Second, spouses of Israeli citizens, whether in a formal or common-law marriage, are entitled to receive Israeli citizenship through a “graduated procedure,” which takes between five and seven years. During these years, the couple must prove that they live in Israel under the same roof and run a joint household. 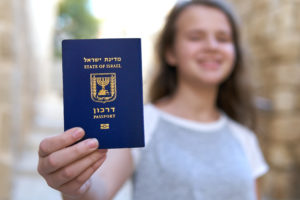 Israel has become an attractive country for visitors in recent years, whether for tourism or other purposes, such as foreign workers, volunteer students, and clerics. Any entry of a foreign citizen into Israel requires a specific visa, issued by the Israeli immigration authorities at the border crossings or by the Ministry of Interior after applying for one.

Millions of tourists enter Israel every year through the border crossings, usually through the Ben Gurion Airport. Entry into Israel requires a B/2 tourist visa. Some countries of the world are exempt from the requirement to obtain an entry visa in advance; in other words, citizens of those countries receive a tourist visa to Israel upon arriving at the border crossing. The visa is usually given for a period of three months. However, border control officials are authorized to refuse or restrict the entry into Israel of anyone suspected of planning to illegally work or stay in the country, or, of course, anyone suspected of criminal activity or threatening national security.

A lawyer specializing in immigration to Israel can act to cancel a refusal of entry or remove barriers to entry into Israel if the decision of Interior Ministry was made by mistake or is unreasonable.

Foreign workers in Israel receive a B/1 visa, which is granted for a period of up to five years; however, renewal is required every year. Foreign workers come to Israel to help with caring for the elderly and disabled, agriculture, and construction. These workers come through recruitment companies in accordance with agreements between Israel and the countries of origin of the foreign workers.

Expert foreign workers receive double the average salary in the Israeli market (as of 2020, approximately NIS 20,000 per month for expert workers). Expert workers come to Israel to work in high-tech or advanced technology companies, but also as chefs in Asian restaurants or at Israeli companies who invite them for their specific expert knowledge.

How Do You Choose a Lawyer Specializing in Interior Ministry Matters?

It is advisable to choose a lawyer who is familiar with the specific field in which you have encountered the problem. It is worth asking the lawyer if he has experience in the field and if he has successfully helped others with a similar problem in the past. Professional knowledge of the relevant laws and the right actions to take vis-à-vis the Ministry of Interior can prevent mistakes.