Do you want to obtain legal status in Israel as an American foreign investor?

The B-5 visa – the first Israeli investment visa for citizens of the USA – was approved back in 2014, but only implemented on the 1st of May 2019. In addition to it’s role in encouraging investment in the Israeli economy, this visa was considered to be “mutual”. Israelis have been interested in acquiring the E-2 investment visa for years. Now, Israeli citizens finally have that opportunity to do business in the US and acquire legal status there. In exchange, Israel was required to allow US investors to obtain legal status in Israel.

The law office of Cohen, Decker, Pex, Brosh, specializes in obtaining legal status in Israel. As of today, we can offer US clients the possibility of receiving status in Israel for those who have no family / marital ties with someone Jewish / Israeli. The following article will detail the relevant procedure, including investment costs, and restrictions. Finally, we will explain how an Israeli immigration lawyer can help advance and secure your visa application.

Historical background – how the B-5 visa was established 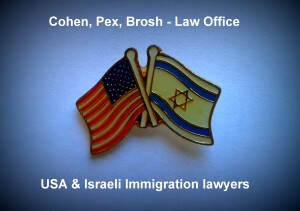 The B-5 visa was first proposed back in 2012. The US president at the time, Barack Obama, promoted a special visa for foreign entrepreneurs. This track was supposed to open for Israeli citizens, but there was one problem – the need for reciprocity. In exchange for Israelis being able to receive an entrepreneur visa to the USA, Israel had to give the same option to US citizens. Moreover, this visa could not be limited only to the Jewish citizens of the United States.

Some officials objected to non-Jews who are not entitled to immigrate to Israel under the Law of Return being able receive permanent status and / or social benefits in Israel due to having purchased or established a business. In addition, there was a need to ensure the B-5 visa applicants had a well thought out investment plan. It was important that the investment would be in areas that help the Israeli economy, and that the business would have a good chance of success.

In any case, implementation of the agreement was delayed for nearly a decade. Now, after endless discussions, changes and updates – what is the end result?

How much do you need to invest in order to obtain an investment visa in Israel?

The first question asked by every potential client on the subject is “How much do I have to invest?” The answer is – “a significant amount”. The procedure which has been published by the Israeli Ministry of the Interior, which regulates the terms of Israeli visas, doesn’t indicate the specific sum of the required investment. Rather, it predicates the approval of the visa upon the purchase of at least 50% of a business that actively contributes to the Israeli economy and employs several Israeli citizens.

How will investing in an Israeli business make it possible to receive a B-5 visa?

The entrepreneur must purchase or invest in an active business in Israel (acquiring at least 50% ownership), with the investment constituting “a significant sum”. The business cannot employ only foreign workers. There is a need to strike a balance between bringing in foreign experts and managers, and creating job opportunities for Israeli citizens.

The visa is open to the business owner and also to senior managers and / or employees who are essential to the functioning and development of the company (holding a B-51 visa). A manager is defined as someone who oversees “the overall functioning of a business enterprise or a key part thereof” or whose role is “the intention or determination of the objectives of the enterprise or its main departments.” An expert worker has “special skills or skills that are essential for the effective and successful functioning of the business enterprise.”

As with any employment of a foreign expert, the company must prove that it was necessary to “import” a foreign worker who has skills that are difficult to find in the Israeli economy.

What about the family of the entrepreneur \ foreign workers in the company?

The foreign investor must prove that the business will be profitable enough to cover the needs of the investor and his family while also contributing to Israel’s economy.

An investment visa in Israel allows the family of the investor, and of foreign workers / managers, to obtain permanent status in Israel (a B-52 visa for a spouse or a B-53 visa for a child under the age of 21). The visa allows the family members to reside, study and work in Israel. They can even work outside the framework of the business in which the head of the family has invested. However, investors and their employees / family members are not entitled to social services due to Israeli residents. In all matters of benefits, national insurance and health insurance, they can only purchase private alternatives.

How long does an Israeli investment visa last?

The validity of the visa is two years to begin with. The visa can then be renewed for one year at a time. In certain circumstances, as long as the business is still active, the B/5 visa can be extended even beyond 63 months (5 years).

Thinking about investing in Israel or helping a foreign interested party find an investment opportunity? Contact an immigration law firm in Jerusalem and Petah Tikva and arrange a consultation meeting now. Cohen, Decker, Pex, Brosh specializes in immigration, status, and corporate and company law in Israel. Our expert lawyers will help you succeed in applying for an Israeli B-5 visa.